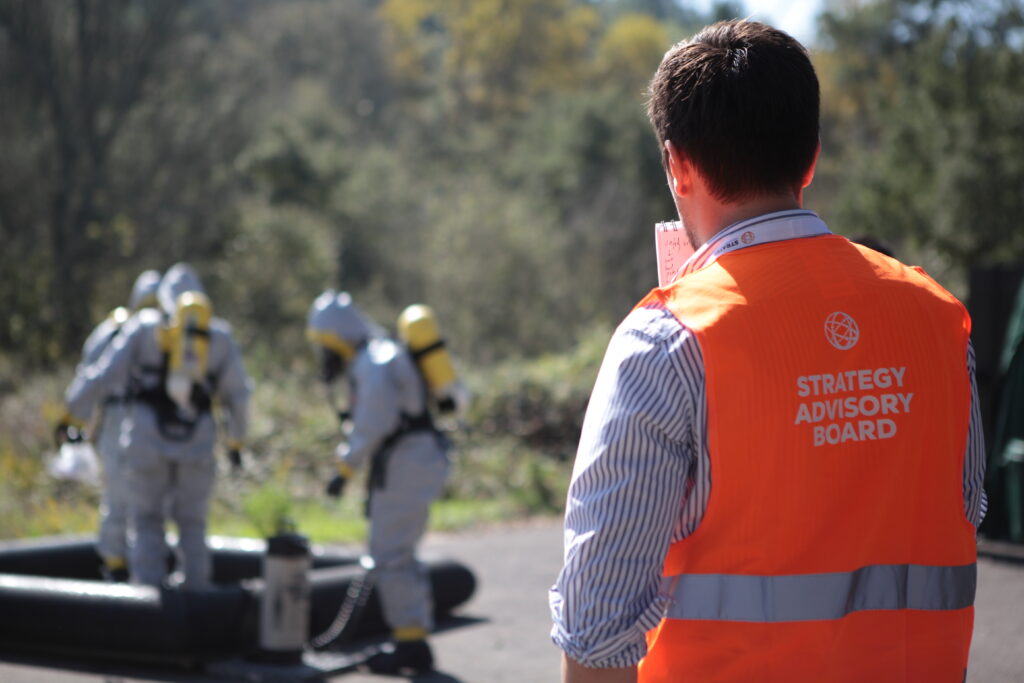 The goal of the TTXs was to test and evaluate the normative documents under development in each Stream in order to collect feedback to further improve them.

This TTX was held in three consecutive days in two different premises of the Portuguese Army: The Military Academy in Lisbon and the Combined Arms School in Mafra.

The first day activities were held at Military Academy, and during the morning session participants were briefed on the content and concepts of the two parts of the Technical Specification (TS) ‘Digital Chain of Custody for CBRNE Evidence’. A short presentation on how UMLDBQ’s Deployable Sampling Teams operates and manages the chain of custody was also given.

On the 12th of October the activities took place in Escola das Armas, where project partners and Advisory Board and End-User Advisory Board members observed the Chemical Defence Deployable Team in action during CELULEX22 – Portuguese Army annual field operations exercise on CBRNE. In the afternoon, the participants were split in working groups to discuss the context of the TS and identify existing gaps and possible improvements.

The next day the group was also in Mafra, as they had the opportunity to attend CELULEX22’s biological incident scenario and observe the Biological Defence Deployable Team collecting samples. After lunch the working groups presented the outcomes of the discussions and the TTX concluded with the wrap-up of the main achievements reached during the two and half days of work.

The afternoon of the 11th of October was dedicated to the CEN Workshop Agreement (CWA) under development in Stream 8: ‘International and interinstitutional crisis and disaster management – Guideline for the mapping of terminology and icons’.

After a short introduction on the content of the CWA participants were requested, as small working groups, to test the proposed methodology and apply the mathematical formula to calculate the similarity between two symbols. The TTX ended with the collecting of participants feedback and ideas to improve the CWA of this Stream.

The last activity of the eventful week was the project’s 3rd plenary meeting, which took place in the Military Academy on the 14th of October. During the day, the STRATEGY coordination team gave an updated overview of the project and shared some discussion topics to be addressed by the consortium. Moreover, Work Package leaders updated project partners on the activities developed, the results reached and the overall progress of the WP they lead. Afterwards, STRATEGY Liaison for ISO (International Organisation of Standardisation) and CEN (Comité Européen de Normalisation, in English European Committee for Standardisation) updated the participants on the most recent activities in that regard.

During the plenary meeting the consortium reached consensus and took important decisions regarding the project’s management and also discussed the ideas and preparations for STRATEGY’s events that will take place in 2023.